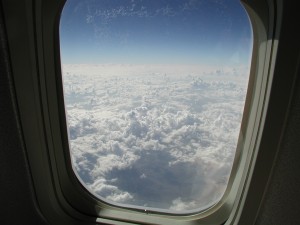 Researchers reporting in the New England Journal of Medicine say that some people are sensitive to low barometric pressures while flying in commercial aircraft. Very low barometric pressures are uncommon in modern aircraft but sea-level air pressures are not the norm either. Some passengers flying on long commercial flights experience feeling of illness similar to mountain climbers who experience altitude sickness.
Feelings of weakness, along with headaches, nausea, mental confusion, fuzzy thinking, leg cramps, swollen hands and feet, dry scratchy throat, and disturbances in sleep seem to be the cluster of symptoms experienced by those passengers flying about 6,500 feet. Even alarming symptoms like blood clots are being experienced more and more among long flight flyers.
Aside from the low barometric pressure, some of the symptoms can also be attributed to prolonged sitting, foul cabin air, fatigue, dehydration and even jet lag. One of the strongest theories that is being researched is low oxygen levels in the blood, which would be indicative of low barometric cabin pressure.
Low oxygen levels have been indicated in an alarming number of serious and chronic diseases. Otto Warburg in 1935 won the Nobel Prize for proving that cancer cells thrive in low oxygen environments. In addition, the cells that are directly adjacent to the capillaries, which are very tiny blood vessels that deliver fuel and oxygen to the cells, tissues and organs, rely totally on the available oxygen supply to function. In altitudes above 6000 feet, they become oxygen starved.
One of the effects of oxygen deprivation is the disruption of the fluid balance inside and outside the cell. In this oxygen starved state, the cells begin to absorb fluid causing them to swell. This swelling squeezes the capillaries, which are about the diameter of a red blood cell, and causes the internal diameter to become smaller. The result is that less blood cells are able to squeeze through the capillaries to feed the cells fuel and oxygen. This dynamic causes symptoms which can become more pronounced on long flights.
Not only that, circulation slows and becomes very inefficient with low oxygen levels. With very little body movement and low oxygen levels on long commercial flights, more and more people are experiencing deep vein thrombosis or blood clots in the deeper veins of the legs.
The NEJM study took 500 volunteers and created a simulated 20 hour flight to check how each volunteer reacted at different altitudes. Any symptoms that were experienced were recorded along with the altitude where the symptom occurred.
Volunteers travelling from ground level to 8000 feet in altitude were found to have a 4 percent decrease in blood oxygen. The severity of symptoms experienced could have had something to do with whether or not people were accustomed to flying at such a high altitude.
Seven percent of volunteers experienced severe symptoms throughout the simulated flight. Other volunteers experienced symptoms after three hours and some others after approximately nine hours. People older than 60 years of age experienced far fewer symptoms than younger people or were less likely to report them. Men were also less likely to report symptoms than women. In-flight exercise that was introduced to see if it reduced symptoms, was ineffective in reducing discomfort.
People taking long commercial flights need to develop pre and post-flight strategies that will reduce symptoms like swollen hands and feet, headaches, fatigue and so on, in addition to risk reduction of such things as difficulty breathing and deep vein thrombosis. By being pro-active, particularly for chronic flyers, good health can be maintained and the event of sudden dangerous symptoms can be reduced or eliminated.