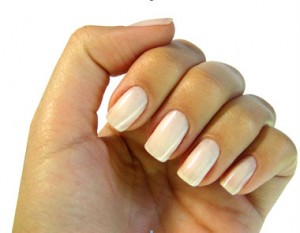 While most people want their nails to look presentable, some people turn them into fashion accessories, getting artificial fingernails, using striking polish colors or having decorations applied or painted onto their nails. Despite our need to manicure them, nails play a very important role as a window to our overall health. They obviously protect the underlying tissue and we use our nails to scratch places that are itchy. Looking at fingernails can show sign of ill health and nutritional deficiencies. Some Eastern practitioners diagnose directly from the look of the fingernails.

Your nail grows from a matrix of cells under the cuticle at the base of the nail bed. It is the quality, growth pattern, color and texture of the nail that indicates health challenges. The American Academy of Dermatology reports fingernails grow between 2 and 3 millimeters every month, a little more in summer, and the nails on your dominant hand grow faster, too.

Along with healthy growth, strong smooth nails point to a strong healthy body. A trained eye can see subtle changes in the body by looking at the fingernails. To feed your fingernails and keep them healthy and beautiful, eat foods containing omega-3 essential fatty acids, iron rich foods and lean proteins. The foods you eat for your nails will also support smooth glowing skin and silky hair.

Stress and anxiety can cause habits like nail biting. Studies show that approximately 50 percent of kids and teens in the US from 10 to 18 and 23 percent of adults aged 18 to 22 bite their nails. A nervous habit, nail biting, does nothing for the appearance of your nails and could be an entry point for infection if any of the surrounding skin is broken. Hand washing to keep the area clean is a good habit to get into.

If you haven’t injured your nail and you have unexplained discoloration, it is wise to have it checked out by your medical professional. Allergies, infections, psoriasis, contact dermatitis and even melanoma can cause distortions and color change in a nail. Getting manicures and pedicures can be dangerous in shops that have poor hygienic discipline. You can pick up all kinds of infections from equipment.

The American Academy of Dermatology shows that nail and surrounding skin fungus infections affect approximately 12 percent of Americans while a smaller percentage suffer bacterial and viral wart infections. Skin viruses are the cause of wart infections, which can sometimes be eliminated by soaking the feet or hands in water as hot as you can stand for 30 minutes, three times per week. Otherwise, they require an intervention by a medical professional.

By observing changes to your nails, you can usually tell if there are warning signs that you need to pay attention to. The first change you may notice is changes in nail color. If it is not due to discoloration from nail enamel, then you need to pay attention. White nails may be an indicator of liver disease, half white, half pink nails may indicate kidney disease and red nails may indicate heart disease. Yellow, thick, slow growing nails that look like they may detach from the nail bed could be a sign of lung disease. Since lung disease causes low oxygen levels in the blood, a condition called clubbing can occur, where the fingertips enlarge and the nails begin to curve around them.

Another nail change is called pitting, where tiny dents in the nail plate occur. This is seen in approximately 10 percent of psoriasis sufferers. Pitting can actually lead to nails that split and crumble. Damage to the cuticle can also occur.

Being observant about changes to your nails can keep you abreast of what is going on inside you. By looking after your diet and your health, healthy nails can be one of the nice benefits.  Many people are finding that by drinking Cerra  Water not only is their skin improving due to the super hydrating and alkalizing   effects but that their nails  are stronger and healthier than ever.   Drink Cerra Water for better skin and nails.